Artificial intelligence leverages computers and machines to mimic the problem-solving and decision-making capabilities of the human mind.

While a number of definitions of artificial intelligence (AI) have surfaced over the last few decades, John McCarthy offers the following definition in this 2004 paper (PDF, 106 KB), " It is the science and engineering of making intelligent machines, especially intelligent computer programs. It is related to the similar task of using computers to understand human intelligence, but AI does not have to confine itself to methods that are biologically observable."

However, decades before this definition, the birth of the artificial intelligence conversation was denoted by Alan Turing's seminal work, Computing Machinery and Intelligence (PDF, 89.8 KB), which was published in 1950. In this paper, Turing, often referred to as the "father of computer science", asks the following question, "Can machines think?" From there, he offers a test, now famously known as the "Turing Test", where a human interrogator would try to distinguish between a computer and human text response. While this test has undergone much scrutiny since its publish, it remains an important part of the history of AI as well as an ongoing concept within philosophy as it utilizes ideas around linguistics.

Stuart Russell and Peter Norvig then proceeded to publish, Artificial Intelligence: A Modern Approach (link resides outside IBM), becoming one of the leading textbooks in the study of AI. In it, they delve into four potential goals or definitions of AI, which differentiates computer systems on the basis of rationality and thinking vs. acting:

Alan Turing’s definition would have fallen under the category of "systems that act like humans."

At its simplest form, artificial intelligence is a field, which combines computer science and robust datasets, to enable problem-solving. It also encompasses sub-fields of machine learning and deep learning, which are frequently mentioned in conjunction with artificial intelligence. These disciplines are comprised of AI algorithms which seek to create expert systems which make predictions or classifications based on input data.

One of our clients is the largest bookkeeping SaaS provider and has a huge customer base. Due to which they get millions of calls from their customers. After every call, agents write the summary into Dynamics CRM. It is calculated that after every call it takes around 3-4 minutes to make the summary, which is called in Dutch “nawerk”. Also, the call record is just saved as one audio file, which has very limited use.

Using Azure Cognitive Services, we record the conversation from speaker and mic. From this conversation identify the customer's account code. Send this Conversation to Azure Open AI Service to get a summary. This summary was saved into Dynamics CRM based on customers account code. 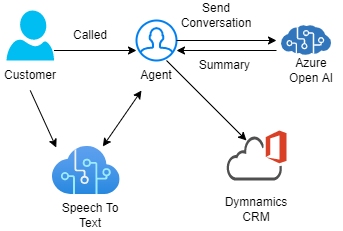